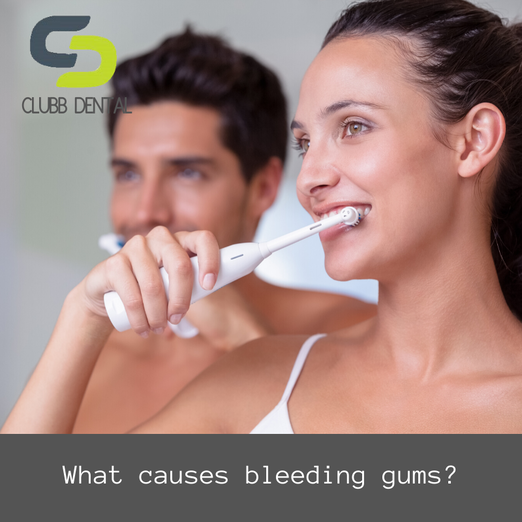 Sometimes when we brush our teeth it can result in our gums bleeding.

Is that normal? When should you worry?

We have all experienced brushing our teeth and causing our gums to bleed, but have you every brushed your hair and caused your scalp to bleed? In our latest blog we discuss what causes bleeding gums and if and when you should be worried.

What causes your gums to bleed?

There are occasions when brushing or flossing a little too vigorously can cause our gums to bleed. This type of occasional bleeding is perfectly normal and a reminder to be more gentle while you are looking after your teeth.

If you routinely get bleeding each time you brush or floss then this is a sign that you have the beginnings of gingivitis or periodontits. This type of bleeding is not normal, just like if you are brushing your hair and your scalp started to bleed.

Gingivitis is the mild version of gum disease.
It is caused by a build up or plaque and bacteria along the gumline.
​This build up then leads to the gums becoming red and swollen, this then leads to bad breath and also bleeding when the gums are brushed.
It is important to schedule an appointment to see me when you are experiencing the signs and symptoms of gingivitis.
It can be treated by having a professional clean and then making sure you are brushing twice a day and flossing one a day.
​The sooner you come in and see me the better the chances are that it can be reversed before it can become the more serious form of gum disease - Periodontal disease.
BOOK AN APPOINTMENT

Periodontitis is the big brother of Gingivitis, the more serious version of gum disease.
In Periodontitis the inflammation and infection has become chronic. This then leads to large pockets forming between the teeth and the gums which  the infection and plaque then sits in.
This can lead to a loss of bone and also the loss of teeth as they become loose in the gums.
For Periodontitis it is important to see me regularly to clean the teeth, sometimes it will also require a referral to see a Periodontist who is a dental specialist who specializes in this area of dentistry. If you are experiencing any of the symptoms of Periodontitis please arrange to have a checkup asap. The sooner treatment is started the greater the chance that the condition can be reversed.

Brushing Flossing and getting a professional clean every 6 months will give you the best chances or preventing gum disease.

Other causes of Bleeding Gums

There are a couple of other causes of bleeding gums:

People taking blood thinning medication can have bleeding gums - medications such as Warfarin, Aspirin, Heparin or Plavix. For those people please take extra care and be super gentle brushing and flossing, it is just like if your skin is cut while on these medications your bleed more, brushing can cause the same types of cuts

Also some viruses and bacterial infections can cause bleeding gums and bleeding gums can be a sign of some diseases developing so it is worth arranging a dental checkup.

New to Brushing or Flossing?

If you are only just starting to brush or floss your teeth you can expect that your gums will bleed in the short term while they get used to it.

Because your gums bleed once when you are starting to floss does not mean you should stop flossing.

Your gums will get used to it.
Give them a couple of weeks and the bleeding will get less and less until they are not bleeding at all.
After all it is important to Brush and floss to prevent gum disease otherwise you will be toothless in your old age.
If you have any further questions regarding looking after your teeth or any other dental question please give us a call or send us a message, we would love to help.
BOOK AN APPOINTMENT
If you have loved this blog and would like to receive more straight into your inbox click below.
Subscribe to Email List